Type your search terms above and press return to see the search results.

As established in the last blog post, humans will always consume in one way or another. However, our behaviour and the ways our societies are built create a gap between what we do and what is good for Earth. Let us first look at the data.

The fifth assessment report that was published by the Intergovernmental Panel on Climate Chang (IPCC) last year confirmed that Earth’s climate is warming and that humans contribute to this warming. Further, looking at the total human greenhouse gas emissions in terms of economic sectors in 2010, the IPCC found that electricity and heat production had a 25% share, agriculture, forestry and other land use 24%, industry 21%, transport 14%, other energy 9.6% and buildings 6.4%. 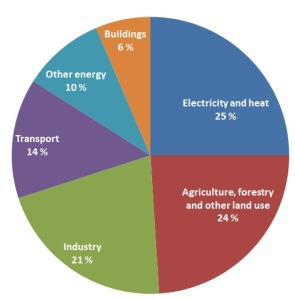 The greenhouse gas emissions in these sectors exist only because humans demand products and services, and they cause global warming.

Lastly, as highlighted by for instance the footprint network, the demand we have for things lead us use more of Earth’s resources than can be regenerated each year. Knowing that the lifestyles we lead in Western countries demand more resources than in developing countries, we can safely assume that our current levels of consumption are not sustainable on a longer term. As the footprint network point out:

If everyone lived the lifestyle of the average American we would need 5 planets.

So, having established that the main reason to be concerned about consumption is related to global climate change and Earths resources, the next question is, why consumption? After all, can’t we just get some more efficient technologies and solve the problem? Also, there is geoengineering, which surely will save us?

I am currently completing a PhD about China’s renewable energy development, so I of course believe that sustainable technologies are part of the solution (although I have strong doubts about geoengineering). However, I would say it is part of a solution that is more applicable in developing and emerging economies where lifestyles are not as resource-demanding as they are in the rich world. As pointed out by Mohan Monasinghe,

In fact, he proposed to set out millennium consumption goals for the rich world, as compared to the more known millennium development goals. I would therefore claim that what we as end-users, demanders or consumers do in the developed world is more important to focus on, since our lifestyles are the main causes of resource depletion and greenhouse gas emissions.

Another important point is that new technologies are facing challenges in taking over for older technologies. For instance, there is the issue of ‘carbon lock-in’ (Unruh, 2000), which means that the infrastructure and institutions sustaining established, carbon-intense energy technologies make them very hard to phase out. These infrastructures and institutions involve things, such as lobbyism and influence on decision makers, but also the established centralised electricity grid system, and larger economic concerns for a country (such as Norway, for instance).

Furthermore, research on innovation, technology and society shows that humans do not automatically adopt new technologies. In fact, we know little about what will become a successful innovation. For instance, who on Earth could have predicted that the Finnish game Angry Birds would become a global hit? In one sense, we can only blame ourselves. Users of technology take part in defining how a technology should work and whether or not it will be a success. But there is a dynamic in that process that is outside of the power of individuals. Users adapt technology, and technology adapts users. No matter how environmentally beneficial, technologies cannot be forced on humans. Does this sound strange to you, perhaps? As this is something of a speciality of my department at the Norwegian University of Science and Technology (NTNU), I will write a separate entry about innovation-research and this line of reasoning.

So we have landed on consumption as a way to tackle the challenges we face. And how are we doing there? What do we know about how we demand, why we consume? These questions are the reason this blog exists. For now, I will point out one aspect I find interesting to mention.

Many scientists are occupied with the question of why and how humans act. One thing psychologists, social scientists and others are grappling to understand is what we call the value-action gap, which can be summarised as the difference between what we say, and what we do. We often say that we care about the environment and global warming, but we do not always act accordingly. Why is that? The answer to that question is, naturally, that it depends on whom you ask. Psychologists would perhaps say that the intention to act was never really present, that climate change is too distant and too vague to care about, or that social norms, habits and other factors influence our behaviour. Economists would perhaps say that the alternative cost is too high, or that it is too cheap to continue with status quo. Other social scientists have tried to reframe the question by saying; do values need to correspond with action (Shove, 2010)? Are not our incentives to act already set by our societies and infrastructures? For instance, the way I use electricity surely is connected with its availability, the electric infrastructure, power outlets, and electrical appliances that abound. These different aspects will be explored further by future guest-bloggers that are specialists within the various disciplines.

A final departing thought is related to happiness and meaning. The philosopher Baudrillard described consumption as a hysteria based on a desire for objects that can never be satisfied. This desire that we feel, Baudrillard hypothesised, is based on a need for difference and for social meaning. Many religions, philosophers and great thinkers appear to me to have shared a general perception that material objects can corrupt humans, and that happiness can be achieved by detaching ourselves from things. Think for instance of Buddhism or the Dalai Lama. I am not saying that we all should turn to asceticism. But, given that environmental and climatic concerns indicate that we should reduce our resource-usage: perhaps consumption reduction is not such a daring path to walk down after all?

There are no silver bullets that solve all our issues. I would claim that the most interesting thing about consumption research is precisely that it is so challenging. Challenging because it is hard to get scientific data on our behaviour, and challenging because we are all consumers and we are reluctant to question our behaviour. In the posts that follow, we shall continue to explore the multifaceted paths of consumption.